I freely admit that I’m not a cinema-going type. My misanthropic tendencies are acutely tested in the presence of inconsiderable louts with their cell phones, eating habits and inability to refrain from talking to one another during the showing. As a result, I rarely go to the movies, unless it is for some kid-oriented viewing with my children, or a personal can’t-wait-must-see-now target such as a new 007 movie.

Occasionally, though, a new release rises to a level of an event, and I make specific effort to go see it.
In my eyes, Avatar was clearly such an event. Everything I saw and heard in the weeks before it came out, suggested that this movie will open a whole new chapter in the history of cinema.

I was not disappointed.

in my book. If you are not afraid of a vague spoiler or two and interested in my musings, feel free to read on. Otherwise, just go and see the movie. In 3D, preferably. 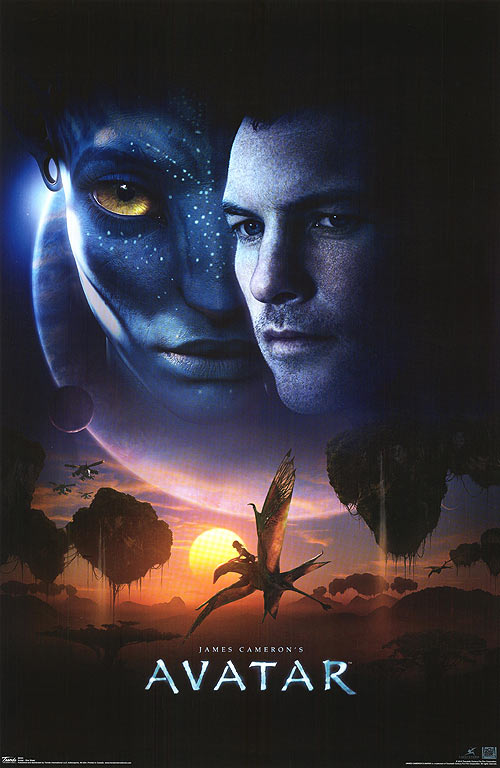 The foundation of Avatar‘s plot is a fairly recurring sci-fi theme: Two different species from different worlds – one technologically advanced, looking on other planets for things that it cannot obtain home, the other much simpler, oblivious of what the other race considers “riches”; the technologically superior race attempts to either eradicate or enslave or otherwise displace the natives in its pursuit of said riches; military conflict, seemingly grossly tipped in favor of the invaders, ensues; when almost all hope for the valiant but overmatched local race is gone, its main champion puts into motion something that turns the tables against the superior-armed force and a certain annihilation becomes a glorious victory…

A simple formula, used many times over. The fable is reminiscent of various episodes in human history (although none, to my knowledge, ever ended with the indigenous party prevailing) and the sci-fi canvas is ideally suited to allow the artist to re-imagine this age-old theme and to explore each man’s – or alien’s – mettle in such a conflict. James Cameron did an excellent job with his own take on that.

The plot borrows enough specifics from other works in the genre and adds enough of original elements so that the proceedings unfold in a captivating and coherent manner. I did not notice any of the loose ends that remained untied and did not have any of the “how does that make sense?” moments that often diminish my enjoyment of otherwise watchable flicks. Everything was explained, every plot device was properly set up in advance, not a single scene felt as if it was confusing or superfluous to the proceedings.

The first adjective that comes to my mind when I think about a movie that does not leave me bewildered about some thing or other is complete. Maybe, it is not the most precise term, but that’s how I’d describe Avatar from the storyline point of view: Complete.

But that’s hardly the important point. Nor are the acting performances truly important here, although we have very solid ones by Sam Worthington, Sigourney Weaver, Michelle Rodriguez, to name a few, and a positively outstanding one by Stephen Lang.

You see, Avatar is not just a special-effects movie. It is a movie almost entirely made of special effects, on a whole new level not ever seen before.

And it is spectacular!

From the variety and detail of animal and plant life on the planet Pandora to the amazingly natural movements of digitized humanoid species, almost every frame of the movie put me in a state of uninterrupted awe. I like gorgeous scenery, so I admit I’m susceptible to being awestruck by breathtaking vistas, but I never imagined that movie-making has progressed so far as to create on the screen a whole alien world in a way that would be so real, in addition to being so magnificent.

Especially, when watched in “Real 3D” (which I was already exposed to with Coraline). Becky, who watched the movie with me, remarked that she did not notice too many “made for 3D” effects, an obvious example of which would be a spear flying straight at the viewer. Instead, the entire viewing experience is enhanced in 3D to the point that you literally feel yourself present in every scene, almost able to touch and to smell the fantastic flora around you. To say nothing of the action sequences, unfolding in front of you as if you were a participant.

Nothing of this kind has ever been done before in cinematography. Those pundits who loftily pronounce that Avatar heralds a new era in movie-making are absolutely right. There now exists a proven technology to render a very complex imagined world in most vivid detail – from here on, the possibilities are endless.

I’m not sure this brief panegyric could convince a non-fan of sci-fi to go and see the movie, and I sort of understand; if Avatar was a slasher/horror flick, I probably would not go to see it no matter how revolutionary it might have been. Still, I think that its effect will be diminished when not viewed on the big screen and in 3D. So, if you have even the smallest inclination that you might want to watch it when it comes to DVD, do yourself a favor: Go see it now.

As for an average sci-fi fan, I doubt you needed me to convince you.

As a parting note, a funny tangent on Joel Moore, who plays something of a sidekick to the main hero. Moore is a recurring cast member on the TV show Bones, appearing once every few episodes as one of the rotating interns working for Dr Brennan. His latest turn in the show included a sub-plot of him and two members of the main cast going to extra lengths to get into the advance viewing of Avatar. I had no idea that Moore appeared in the movie when I watched that episode, but as soon as I recognized him on screen, I realized that that Bones storyline was written specifically for him. I find that quite clever and amusing.