We have a nice pond with a little waterfall and fish in the garden. 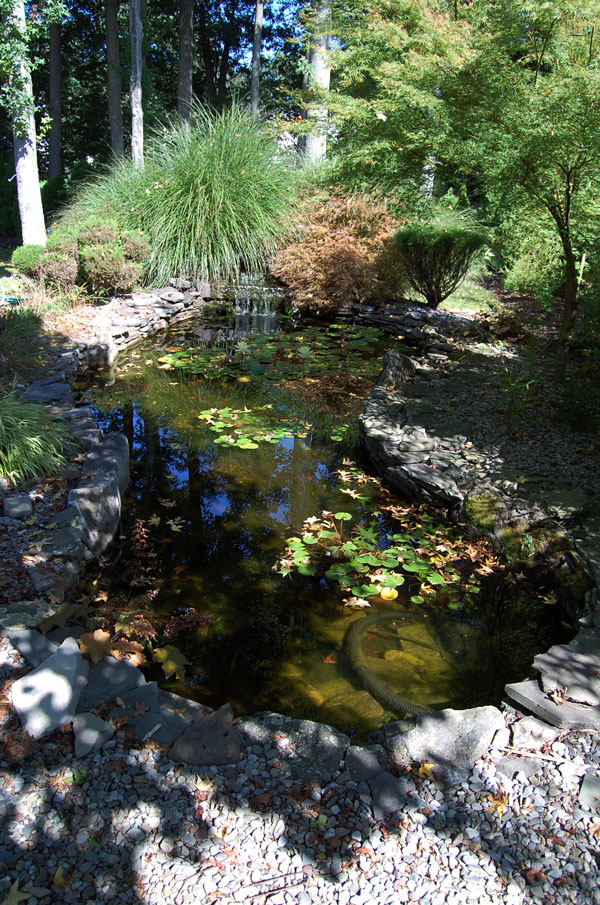 It caused us quite a lot of pain in the run up to closing the house purchase. We’ve been given several versions of the events by various sources, and were finally able to piece it all together.

The previous owners of the house liked that pond very much. They installed it over 15 years ago, with appropriate permits from the township, and enjoyed the sound of gently cascading water and the pleasing ambiance of having it in the garden. Adding to the charm, a bunch of koi fish lived in the pond.

Then, a few years ago, the owners decided to add frogs to the mix.

Yep. They figured that the sound of a dozen croaking frogs is exactly what’s been missing from the picture.

And the frogs croaked. Or barked, given that this species of amphibians is known as “barking frog”. The owners loved it.

The neighbors, however, were not happy at all. Their much younger children could not fall asleep under the constant accompaniment of frogs. I am not sure how many times, if at all, they asked our sellers to get rid of the frogs, but eventually they complained to the township. I fully understand their desperation.

The township couldn’t or wouldn’t do anything about the frogs directly, but it suddenly “realized” that the pond was built on top of a utility easement. Which is a serious no-no.

The sellers did remove the frogs eventually. Or the frogs died out, I am not sure. But when the owners applied for a Certificate of Occupancy in order to sell the house to us, the township refused to issue one unless the pond was altogether removed, correcting the issue with the easement. For practical and impractical reasons, nobody wanted to do that. The sellers’ attorney engaged in negotiations with the township, which yielded the following result: The CO was issued in exchange for us signing a document that granted us a revocable license from the township to use the koi pond – and nothing else – on this particular easement. The township has the right to demand that we remove the pond from the property at our sole expense, but nobody seems to think that this will ever happen. (Whether this will become an issue when we decide to sell the place is a point of concern, but I’m not willing to lose sleep over it for the next ten years or so.)

These negotiations ended up pushing the entire process back by a week, which sounds like an unremarkable inconvenience until you factor in all of the other inconveniences related to being in between houses.

On the plus side, we have a beautiful pond.

A couple of days after we moved in, the landscaper who worked on our new garden for the last however-many years paid us a visit to introduce himself and to offer his continuous services. Our neighbors saw him and almost had a heart attack. They inferred from his visit that we would be getting the frogs as well.

We assured them that we have no interest in that. I can’t say that I much enjoy any night-time noises. The chirping of crickets, at least, largely becomes white noise after a while…