Jumping off a boat

Even a person who never seeks thrills, always drives under the speed limit and avoids the smallest possibility of appearing adventurous can probably name a few “close calls”, situations that had the potential of ending up with unpleasant consequences where it concerned his life and limb. Off the top of my head, I can think of a handful of near accidents that could cut my life short, from an unexpected somersault over the front of a bicycle on a busy thoroughfare to the fortunate delay in corporate plans to move our offices to one of the World Trade Center towers.

Then, of course, there are people who thrive on putting themselves in danger, be it mountain climbers, para-gliders, bungee-jumpers, or some such. For them, a close call is a badge of honor and your behavior during critical moments – or, in some cases, the simple desire to experience something that is death-defying – defines your worthiness as a man1.

I am decidedly not a thrill-seeker. Not out of any fear, but I tend to avoid potentially dangerous activities. Partly, that is due to knowing that my vestibular apparatus cannot withstand abrupt changes in motion and/or pressure. Partly, it is because the one time I did something ill-advised for thrills, it left a less than positive memory.

The year must have been 1982 or 83. My family was spending several weeks in summer on the coast of the Black Sea, near Tuapse. My Aunt’s family were vacationing with us, and between my brother, my cousin and myself, we had plenty of good time, as children can have on the beach. 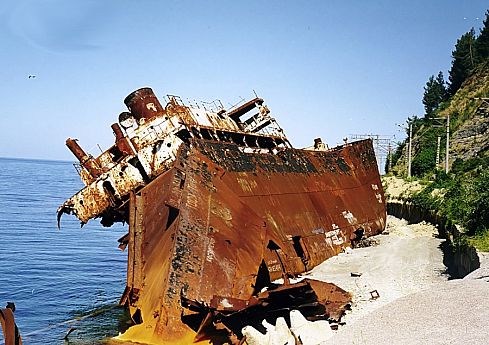 Not half a mile from our patch of the beach, there lay an old and rusted oil tanker.

French by origin, it ran aground in 1967 and managed to wedge itself into the shoreline at such angle and force that all subsequent attempts to free it failed. Left alone and neglected, it eventually became a sort of a landmark, always attracting the attention of passengers of numerous long-distance trains running along the shore to and from Sochi.

It was also a prime diving spot2.

I am not sure after all these years why I was hell-bent on attempting a jump off this ship. I was a proficient swimmer as a kid, but I never mastered the technique of coordinating my body into a proper “swallow”3 position for a good dive. But the idea of trying to jump was somehow very tempting.

You cannot see the portion of the deck used as a diving platform off the ship in this picture, but it must have been at least 15 meters high. There were always a dozen or so college-age kids around, jumping or diving with abandon. Some of them, better skilled and dauntless, climbed to an ever higher platform and executed beautiful dives into the brilliant blue waters below. Others, less inclined to try, simply observed the proceedings and dared their friends to go on.

I can picture myself standing on that platform quite vividly. My Dad was confident that I could do it, but he still allowed me to go for it only on a condition that I had to back out if I felt scared. I hardly felt any fear, though. The distance to the water felt immense, but any creeping doubts were overwhelmed by the expectation of a thrill. The older kids around me were clearly having fun. I had to jump.

Funny how I remember before and after well, but hardly remember during. I used to say that during my jump, the sensation of descending had been replaced by the sensation of not being sure which direction I was moving in, but I later came to believe that I simply had imagined that for the sake of making it sound more fun than it truly was.

The truth is, one moment I left the platform, and the next moment I broke the plane of water.

Even though I entered the water at what I thought was a reasonable angle, I still banged my feet and my buttocks quite solidly on the surface. It did not knock my breath out, but when I came up, all I could think of was to get a grip of a floating mattress and not move for a while. Any thoughts I might had had before about jumping more than once were gone in that instant.

It took quite some time to shake off the ill effects of that jump.

That stayed with me until this day: The absence of any – let alone exciting – recollection about the actual jump and the painful reward for doing it. It shaped my entire approach to thrill-seeking activities – even when I do not expect to suffer physical punishment in an attempt to do something “exhilarating”, I expect the experience to be fleeting and unmemorable4.

Never mind that I could have killed or crippled myself. As I grew older, I started to regard that jump as one of those close calls…

1 My apologies for inadvertent sexism, but I do not know nearly as many daredevils or thrill-seekers among women as I do among men.

2 The picture dates from 1988, but I have a distinct impression that the ship was sitting much straighter several years before that.

3 I am not sure if this translates from Russian properly, but the head-first dive position was called in Russian like a swallow, while the feet-first jump was called like a toy soldier.

4 Skydiving, I suppose, is a lengthy enough activity to leave an impression, and I have a feeling that I’d probably enjoy that. Considerations of potential violent protests of my organism stayed my hand so far, besides the outspoken objections of my caring spouse.