Our desire to move house has been quickly replaced by the pragmatic contentment with staying put. A sizable reduction in the rent amount has that type of effect on us.

At the same time as we started to look for different accommodations, we suggested to our current landlord that in this deteriorating market we should be paying less than what we are paying now. And put forward a number. Which the landlord agreed to without any arguments or negotiations.

We should have proposed an even lower number, of course…

In any case, as any house that we might find in Blackheath would no longer cost less than what we will be paying here, and the move would involve certain additional costs one way or another, we reasoned that fiscal considerations trump our desire to be nearer a place that is much more fun. Becky is sorely disappointed: She was already imagining getting extra sleep in the mornings as well as the ease of hanging out with friends.

Having to make that decision somewhat spurred us to look again for more active ways to spend our weekends. It is something that we have done a lot in the first year or so of living in the UK, but gradually stopped doing both because of our relative remoteness from the city center and for perceived lack of as-yet-untried options. But options, of course, do exist.

On Saturday, we went for a tour of nearby Chislehurst Caves. Dating from millenia ago, the 20 miles of underground passages acted as mines, bomb shelters, an entertainment venue and a location for “Doctor Who” filming in their history. The tour was moderately interesting, just the kind of diversion from staying in that we needed.

Here is a picture of an explorer: 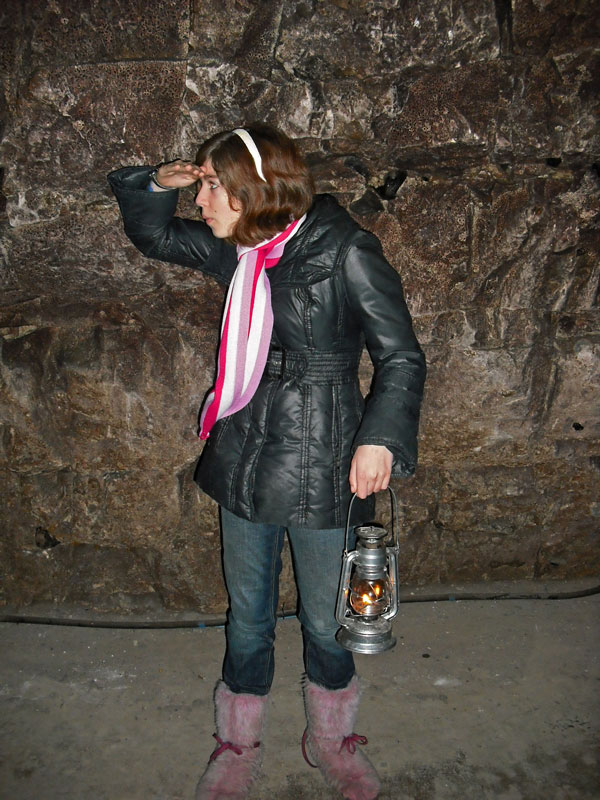 We followed that with a meal at a nice restaurant in Chislehurst village.

On Sunday, Natasha and I drove across the southern part of the greater London to Richmond, for an impromptu celebration of our friend Alex’s birthday. Alex and Anya suggested an atmospheric Belgian restaurant in Richmond, where we spent several hours at our favorite catching-up ritual, accompanied by fine wine and food.

Getting out of home on weekends has an undeniable positive effect on us. We need to work on making the next weekend eventful. And the next after that…

Posted in Chronicles, In London