We’ve gotten really predictable these days. A nice, if crisp, sunny day means that we take Kimmy to her favorite playground, while Becky stays home to prepare herself for her next outing with her friends. Very little variety in that.

At least, we still seem to find fun even in that. 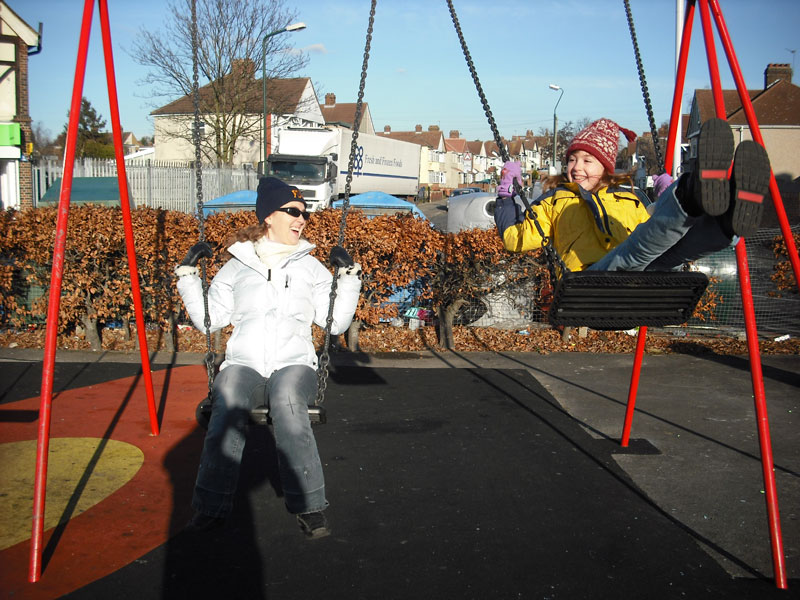 The worst part is that we have no firm travel plans for the foreseeable future. Recession, uncertainty, you know. Kimmy came up to me the other day and asked, “Daddy, where are we going to next?” I answered that we did not know at the moment. She said, “Oh, but I want to go somewhere!”

Natasha and I immediately started thinking up possibilities for the February half-term, which we so far considered as a non-travel period, not just because of the expense factor, but also because Kimmy has some dancing school engagement towards its end, so we may only have 4 or 5 days to play with. Unfortunately, unless we go skiing during that time (probably, a little too much of an expense that we want to incur at present), most of the “next” places on our list – Oslo, Stockholm, Copenhagen, Zurich, Budapest, repeats such as Vienna or Prague, – are going to be cold enough in February as to make sightseeing less than delightful. Lisbon or Istanbul seem to be two choices with a better chance of moderate weather during that time. (Becky has got quite excited upon hearing that Istanbul was in the mix, by the way.) Mediterranean resort destinations of Malta, Cyprus, Tunisia, even Egypt, are all not warm enough for swimming in the sea in February, and that diminishes their attractiveness to me. Flying anywhere further than that for just a few days is not something that I’m keen to do.

The biggest single problem with the concept of living in Europe for the purposes of frequent travel is that you still have to go pretty far to find pleasant destinations in winter. The distance advantage over the US tends to disappear (or even reverse, if you consider the Caribbean) during the winter months. Oh well…

It took less than a week to receive my first completed photo-book. It came out not bad at all. I’ve updated the article with the outcome, as well as incorporated my notes on another product not previously reviewed, for those interested.