A trip to Rochester

We dithered a bit in the morning whether to go anyplace or stay home. Early in the week, we sort of decided that if the weather was nice on Sunday, we’d pick one of the nearby points of interest that we have not yet visited and go there. In the morning – which was awfully close to noon today, since all members of the family made a concerted effort to catch up on sleep lost during the previous, “sleepover”, night – the skies outside did not look too promising, but it got brighter by the time we finished breakfast. So we went to Rochester, about half an hour away from where we live by car.

The compact historic town of Rochester boasts several architectural gems, some of which are closely associated with Dickens. (For instance, Restoration House is the residence of Miss Havisham in Great Expectations, although in the book it is called Satis House, which happens to be the name of another building in Rochester.) Most of these houses are situated along the pretty High Street, full of quaint little shops. We ventured inside some of the shops, but not inside any of the houses. Instead, we stepped into the fine Cathedral and spent some time exploring the ruins of the Castle. 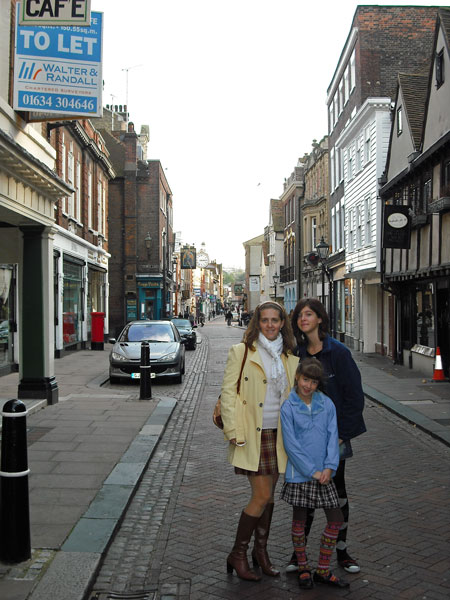 In the end, the nice little trip was accompanied by sunny skies for most of the time. And as soon as we returned home, the firmament changed its color to more seasonably appropriate gray.

By the way, we decided to take the new Fuji with us instead of the Nikon, and took quite a lot of pictures, most of which came out reasonably well.

On a related tangent, we used our English Heritage membership to get into the Castle for free (it costs £14 for a family, otherwise). In this post about a year ago, I wrote about how we didn’t exactly cover the cost of the membership in the first year of getting it, but how the society still sent us new cards for the second year. I’m starting to think that I could have not been paying attention when we signed up and that the membership was for two years. Natasha used the cards without a problem – validated at the entrance – a couple of times at the Eltham Palace with her parents this year, and we used them today as well. The original cost of membership, £65, has now certainly been recouped with interest.

We have not been sent cards for the next year…