I have been fairly brief so far in my descriptions of the places that we stayed at during the big summer holiday. A more expansive overview is likely due. So, for those interested, here is an entirely subjective comparative look at L’Estartit on Costa Brava in Catalunya, Roquebrune-sur-Argens on French Riviera, and Montespertoli in Tuscany.

The village of L’Estartit sits smack by the Mediterranean sea, hemmed in by mountains, with only one road in and out of town. Because of its “dead-end” location, L’Estartit does not get any through traffic. And while there are plenty of vacationing people here at the height of the season, most of them actually stay in town – there is no huge daily influx of people from nearby locations.

The nearest big towns – Figueres and Girona – are about 40 minutes away each. Barcelona is within an hour and a half long drive.

This was the only time out of three that we actually rented a villa in town, on the mountain overlooking the coast. The views are fantastic (albeit not directly from “our” villa). 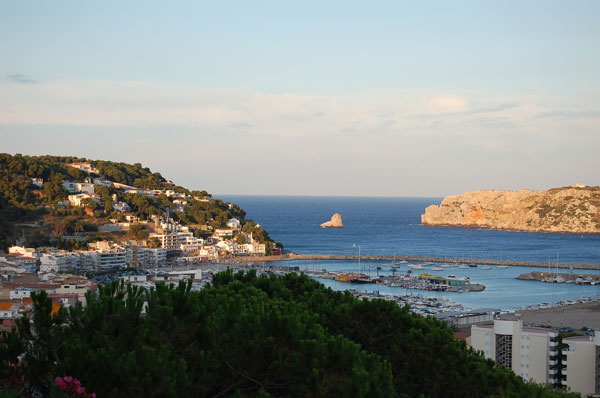 Roquebrune-sur-Argens is positioned several miles inland from the Riviera coast, an hour-plus away from Marseilles in one direction and slightly less time away from Nice in the other. The village is positively sleepy even at the busiest weeks of the season compared to the likes of nearby bigger Frejus, or bustling seaside resorts of Ste-Maxime, St-Raphaël or St-Tropez.

Our villa there was actually about 15 minutes away from town, in a gated community by a golf course, with sweeping views of the Frejus coastal area. The interesting bits remained too far in the distance to make the landscape truly breathtaking, but the colorful illumination of the Frejus amusement park at night compensated for that a bit. 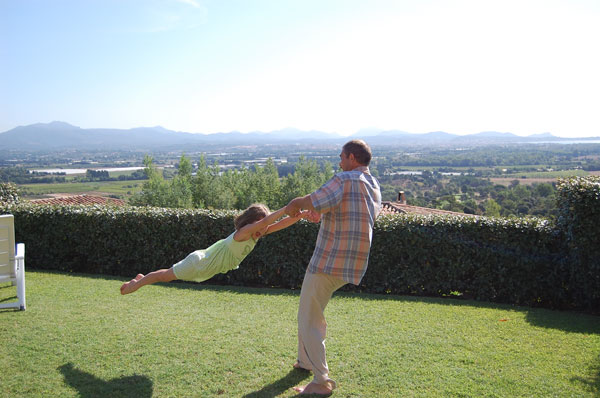 The best view from our French villa happens to have Kimmy and her Uncle in it.

Finally, the town of Montespertoli is situated more or less in the geographical center of Tuscany, about 20 kilometers south of Firenze. The villa that we have rented there for the second year in a row is about 6 kilometers out of town, closer to the hamlets of Fornacette and Lucardo than to Montespertoli proper. The view from the back of the villa of the Tuscan countryside and hilltop towns is to kill for. 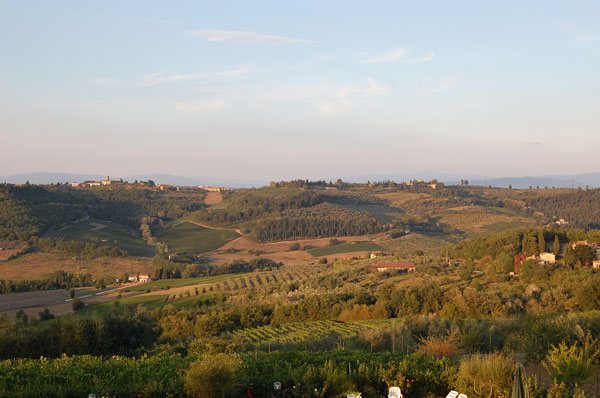 Leaving specifics of our accommodations aside, here are some features of the three locations.

L’Estartit is a lively small seaside resort, with a pleasant ambience and uncrowded beaches. Not an architectural gem of any degree, its central area is full of shops and cafés. The only road that leads out of town goes into bigger Torroella de Montgri, with an atmospheric historic center.

The main road through Roquebrune can give you an impression that there is not much to the village. That is misleading. Roquebrune boasts a quite nice and compact pedestrian historic core, with shops and galleries and a couple of old churches, worth wandering through. There is a number of farms and wineries around it.

Montespertoli is a typical Tuscan hill town, but it does not have a historic core of any note. While all of the necessary services can be found in town, you don’t come to Montespertoli for Montespertoli.

A day-trip to Barcelona is doable from L’Estartit, but the distance is a bit too far to make multiple jaunts practical. Figueres, with its fantastic Dalí Museum, is a much easier trip. But best of all, there is probably a dozen of well-preserved medieval villages within 20-minute-drive range from town: Pals, Begur, Peratallada, Pubol, Ullastret, etc.

We spent a day in enchanting Aix-en-Provence, but on balance, Roquebrune is not positioned too well for exploring Provençal locations such as Avignon, Arles, Remy or even Marseilles, since each is pretty far away. Côte-d’Azur destinations are another matter, although Monaco is still further away than Marseilles. Nice, Cannes, Antibes, Grasse, Ste-Maxime/St-Tropez, Frejus/St-Raphaël are all within less than a hour of driving.

Only staying in Florence itself can beat staying just half an hour away from it. We made three different day trips into town this time around. But not only Florence – almost all of Tuscan major sights are within an hour’s drive from Montespertoli. That includes the “big five” of Firenze, Siena, Pisa, San Gimignano and Lucca, as well as “lesser” destinations such as Certaldo or Volterra and the entire Chianti Classico region. The only comparatively major location that is slightly too far from the “base” is Arezzo.

Wide sandy beaches and a pleasantly sloping sea floor feature in L’Estartit. The water was consistently on the cooler side in the mornings, even with the air temperature in 30’s Celcius. The sea got warmer as the day progressed, but the wind would pick up and the waves would get stronger just when the water temperature would get lukewarm. Didn’t stop us from enjoying it, of course. The kids – Kimmy, especially, – actually like waves a lot more than a calm sea.

That’s what characterized the sea on the Riviera – calm. It was also incredibly warm most of the days (except that on our very last day the water temperature must have been something like 16°C – only Becky managed to get any meaningful dip out of that). The beaches were not as great; while there are some nice ones in major resort areas, they are terribly overcrowded in early August; we went in search of less crowded ones, many of which are either stony or consist of fairly small patches of sand; they also slope rather quickly to considerable depth – great for swimmers, not so great for kids who want to play in the water. In the end, we settled on a couple of reasonable sandy beaches in Les Issambres.

One thing that a base in Montespertoli is not fit for is a beach holiday. We only went once to a Tuscan beach, in Marina di Pisa, finding a narrow sandy patch in an enclosed lagoon, surrounded by otherwise rocky beaches. The water was warm and still, albeit with a lot of silt towards the deeper end. I can’t view that as a representative Tuscan beach-going experience, and the subsequent drive down the coast towards Livorno did not help in ascertaining the quality of the beaches, as the road is separated from the shore by various resorts’ grounds.

This is not where I tell you that I like Italians and Spaniards almost equally, and the French somewhat less. Oh hell, looks like I just did!

No, I meant to address crowdedness, which is not an entirely fair comparison, since we were at our three locations at different points in terms of peak crowds. But anyhow, L’Estartit in late July does not feel too crowded; nor do nearby attractions. The first half of August on the French Riviera is hands-down the busiest time, and although Roquebrune itself is situated well away from the congestions, going almost anywhere is fraught with traffic jams, crowds and aggravation. Montespertoli and environs in late August, conversely, feels altogether serene; the major sights are far from deserted, but the biggest tourist crush is already over.

Another slightly unfair comparison. First, we were already familiar with the French – and Provençal – cuisine, and of course with the Italian one; but we tried traditional Catalan dishes for the very first time. Secondly, while in Spain our friends took us to several fairly upscale and expensive restaurants, in France we went out just a couple of times to places selected because of their proximity to the villa; in Italy, we twice went to a place that we liked since our last year’s visit and also had several meals at random eateries on day-trips.

With those caveats in mind, it is hard to objectively differentiate between our culinary experiences. We like all three cuisines fairly equally. Catalan kitchen score extra points on account of being just discovered. Italian/Tuscan cuisine loses a couple of points because, excepting Kimmy, we are only ok with pasta, not crazy about it, – but the various meat dishes are fantastic. French food is simply superb. It’s neck-to-neck in this department.

So, what’s the overall verdict?

It wouldn’t come to anyone’s surprise if I said that all three locations were nearly perfect, would it? The Riviera leg of our trip was a slight notch below the other two, primarily because of the crowd factor and the two days of mistral, which were the only bad-weather days of the entire trip. But Costa Brava gave Tuscany a run for its money as a paradise on Earth on all counts, with a clear lead in the seashore category.

Me, I am not an avid beach-goer. So, if I had to choose one, I’d probably have taken the idyllic Tuscan countryside. But I don’t have to choose one, do I?