The last busy weekend of the season

The weekend was spent in various activities involving our latest visitors, which explains the first non-travel two-day post gap since sometime last year. With our approaching long holiday, it should be the last active “home” weekend for a couple of months. Anyway, here is a brief re-cap.

On Saturday, we went to one of the last remaining “major” destinations in greater London not visited before – the Windsor castle. While overall very impressive, to say nothing of huge, it left us slightly underwhelmed. Possibly we’ve seen too much opulence at various palaces over the years. Or the absence of usually requisite vast surrounding grounds diminishes the impression. 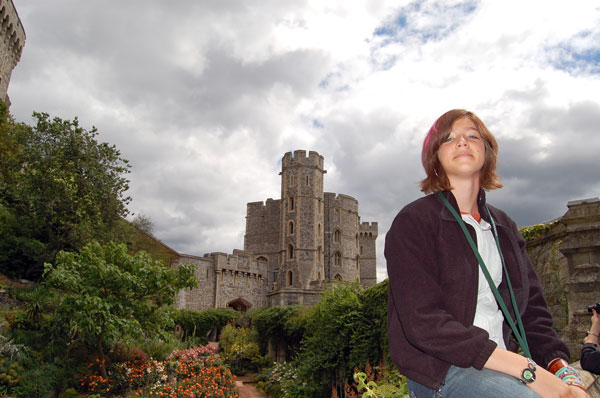 The State apartments boast great armour displays and a worthy of a top gallery collection of paintings by Rubens, Van Dyck, Rembrandt, Canaletto, Holbein and others. Otherwise, their grandeur is fairly understated – not a bad thing, really, just not exactly awe-inducing. There is an incredible Dolls’ House as a separate point of interest (prepare to wait in line for an hour or so), and a marvelous chapel within the castle’s precincts.

Interestingly, the youngest members of our group were the ones who had the most fun. Kimmy and little Sammy walked around with their own audio-guides set to children-oriented narrative, which constantly asked them to look for specific things in each room. They were on a sort of a treasure hunt all along…

We also spent a bit of time strolling through the busy shopping-and-eating area around the castle and walking across the river to the atmospheric Eton village. A great day-trip, overall.

On Sunday, we escorted our friends to the familiar environs of Greenwich, Prime Meridian and all. The weather was lovely, so we eventually found a pleasant spot on one of the Greenwich Park’s vast lawns, and the kids and their Dads engaged in a lengthy round of “monkey-in-the-middle”, while the Moms idly relaxed in the sun.

Dima and I later tried the quintessential British pursuit of going to a pub. Old and lazy guys that we are, we figured that the nearest pub to the house will do quite fine. The flaw of the plan was that, due to its location and its status as a “gastro-pub”, the establishment lacks the true atmosphere of a pub. It was quite deserted. We both rather value comfort and quiet over the hustle and bustle of a crowd, but the experience was certainly less than quintessential.

Later on, it was time for a guitar and a karaoke. Perfect finale!

In unrelated news, Natasha did not get on with the program after the recent international calling debacle and continued making calls to Russia in the regular manner. That resulted in our outgoing calls being blocked again, and I still cannot get it resolved as the monthly bill is only expected by the end of this week. We decided that we did not care to do anything about it, on account of leaving on a holiday quite soon. If the stupid phone company does not want us to incur legitimate charges – and they will eventually compensate us back for all of the illegitimate ones, no doubt! – then that’s their problem. We can do most of our calling from the mobiles.

Kimmy woke up this morning with a despondent feeling of being the only child in the house who still needs to go to school. It took me a while to convince her that there are only a few days of it left. Many breaks during the year are all fine and dandy, but it’s entirely ridiculous of the British school system to have children in classes in mid-July…

Posted in Chronicles, In London