Lest anyone thinks that we long exhausted potential destinations in or around London, let me assure you that that is not true. Our target list has certainly dwindled down from several dozen point of interest to less than a dozen, but that less than a dozen remains.

Today, we used the arrival of our newest guest as a pretext for visiting Sissinghurst Castle Gardens. The very compact grounds consist of several thematic gardens, intimately separated from one another by hedges and old castle walls. The gardens are not showy, but that adds to the attraction – you get a feeling of authenticity, of what the quintessential English garden should be like. 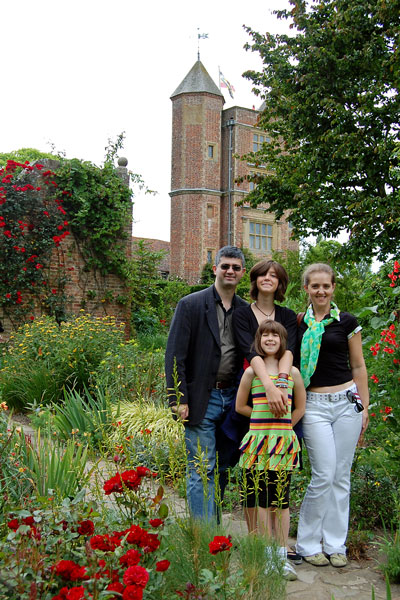 We actually rekindled our two-active-day-a-weekend erstwhile approach to living in London this Saturday and Sunday. The definition of “active” is, of course, in the eye of the beholder. A trip to Regent’s Park takes us about an hour either by car or by public transport, and I count making such trip as undoubtedly an active pursuit. We went on Saturday, first met up with Anya and Ari, walked in the park a bit, let Kimmy indulge herself on a paddle-boat ride, and then joined Lyuba and Pasha and a bunch of their friends for a picnic. They discovered a semi-private garden in the heart of the park, which, while being opened to the public, is largely unknown to said public on account of being tucked away behind a gated entrance. Very peaceful and pleasant in there, the only disturbance coming from… well… ourselves.

Considering that on Friday night we played host to a bunch of Becky’s friends for a sleep-over (ok, ok, I did not play host – I was largely holed up in my study, attempting both to be inconspicuous in my presence and to keep my equanimity in the face of the incessant noise coming from downstairs), and that on early Sunday I had to drive to the airport to pick up my Aunt, this has been a busy weekend indeed.

I’m going to top it off with the Euro final in the next hour.