Back from Antwerp and Gent

My loving children will forgive their old man for saying that it is infinitely nicer to travel without them. Our weekend getaway to Belgium was neither a dream trip nor even a particularly fascinating one, but it allowed Natasha and I, for the first time in ages, to spend time just as we wanted, not as our occasionally capricious offspring demand.

The weather gods decided to rain on our parade, quite literally, and while that managed to dampen some of our impressions, it also played a perfect foil to a well-deserved intermittent downtime for us kids, wink-wink… 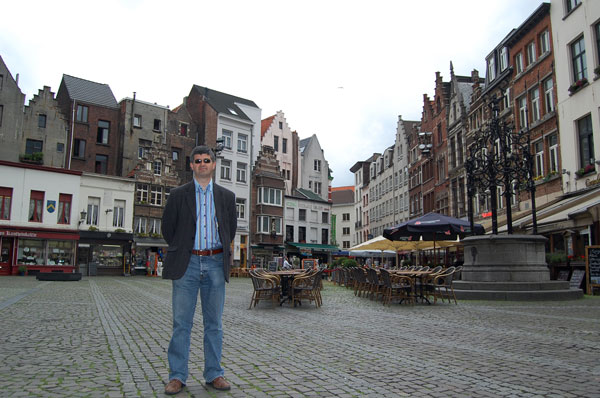 Our target was Antwerp, which we heard a lot about, with an intraday stop on our way back in Gent, which we heard very little about. We were looking forward to seeing more of medieval gabled magnificence of the kind that we saw in Brugge.

Antwerp slightly disappointed in that regard. It has a beautiful main square, Grote Markt, fronted by a magnificent Rathuis; a similarly attractive triangular cathedral square, Handschoenmarkt; a peaceful tiny cluster of streets around Hendrick-Conscienceplein; and several other small pockets around the historic city center, where time seemingly stands still. But architecturally homogenous Antwerp is not, with buildings and entire blocks of less-than-special industrial-age appearance alternating with lovely medieval façades with annoying regularity even on what could be otherwise gorgeous streets.

Gent, on the other hand, came as a pleasant surprise, unbrokenly picturesque in its historical core, with fine vistas from many vantage points, not least of them the fantastic views in all directions from Sint-Michielsbrug or the bird’s-eye perspective from the upper level of Belfort. Canalsides of Graslei and Korenlei look positively Venetian, and overall, just as in Venice years ago, or in Brugge last year, we wanted simply to wander around and take pictures on every spot (unfortunately, very few pictures were taken in the end, on account of mostly inclement weather – we had about one hour of sunshine and four hours of alternating drizzle and downpour).

In hindsight, we should have structured our trip with less time in Antwerp and more time in Gent, but, hey, we certainly have another destination to look forward to coming back to, now.

How did we manage to get away from kids? some may wonder. No, we did not get to a point of leaving Becky in charge of the house for the whole weekend. She is only 13! As a matter of fact, she was on an adventure of her own – a white-water rafting camp with her school (fell into water with quite a regularity, from what I was able to gather). That left only Kimmy and Natasha’s Mom at the house for a couple of days. My mother-in-law has enabled our travels on several occasions in the past, and we finally decided that what worked for us in America can also work in England, even for a shorter period. Which it did.

As always, the detailed notes on sights, restaurants, etc will be posted in Travelog in the near future; as will a small photo-album.