The spring showed a bit of skin today, and I could only look out the window for so long before deciding that I’d better get up and go out.

One of the first thoughts was a round of golf, but my last round in December managed to dampen my enthusiasm for the activity. Instead, I printed myself a few suggested walking routes from a tourbook and went to the central London. 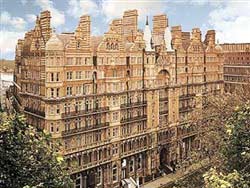 The routes took me to heretofore unexplored parts of Bloomsbury and Holborn, with many architectural stunners and several pleasant squares. Some streets I had entirely to myself, while motorized traffic was largely non-existent. I lingered in the sun here and there, reading a magazine or watching infrequent passerby, and managed to kill almost four hours doing practically nothing. It could have been even longer, but many places on my circuit that I thought of checking out are closed on Sunday.

I always say that sightseeing in solitude is a boring exercise, because you need an ability for spontaneous emotion-sharing to make it truly rewarding. But when the weather is nice, aimlessly wandering unfamiliar streets could be quite fulfilling, not mentioning the huge upgrade over sitting home alone in front of a PC…