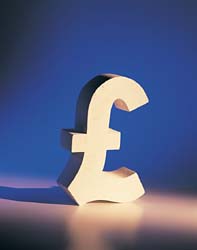 If your income consists of solely salary and wages, then filing a tax return in England is a very simple self-assessment process. Online or on paper, you literally need to provide just a handful of numbers from your W-2 equivalent (called P60), tick off a bunch of boxes, sign, and voilà, you’re done.

It does get slightly more complicated if you have taxable interest earnings or capital gains (in the case of a non-ordinary non-domiciled alien who keeps all accounts offshore, those gains are non-taxable unless they are “remitted” onshore). More work comes with figuring out what you can exclude from your salary income based on having spent workdays abroad, if you are a non-dom, but in general, filing the return is a fairly quick and straightforward process.

Accounting firms inexplicably charge hundreds of pounds for the privilege of doing your UK taxes. Professional accounting help – for at least the first year, sometimes longer, – is a never-disputed component of any relocation package. Both of the facts above leave me scratching my head in confusion after my own first experience with UK returns.

The tax year in the UK runs – imaginatively, I must add, – from April 7th of one year to April 6th of the next. Your tax return is due only on January 31st of the year that follows. In other words, there are almost 10 months between the end of the fiscal year and the due date for your return – which would also be the due date for paying any taxes that you owe.

PricewaterhouseCoopers, who had the honor of providing me with taxation assistance, were pleasantly helpful and responsive at the initial stage of my arrival, back in 2006. They had to submit some initial documentation to “register” me as a new taxpayer, and they provided some useful consultations along the way. So far so good.

When the time neared to do my US taxes in 2007, for which PwC also had a remit, I decided that it was nonsensical to make a one-year switch from my trusted personal accountant – who also doubles as my Mom – especially given that my US taxes are moderately complicated. But for UK taxes, I figured that I might as well use the “free” – to me – service.

Early last summer, PwC contacted me with a request to fill out an elaborate questionnaire for the recently ended 2006/07 fiscal year (that, by the way, by itself required more effort from me than the entire self-assessment would be, but I did not know it then). After I returned the completed spreadsheet to them, I was notified that my tax return was “in process” and I would be contacted in case additional information was required.

Fast-forward to early January 2008. I get – along with every taxpayer in the country – an official reminder of the impending deadline for filing. The notice also mentions that if the additional taxes due are not paid on the 31st, there is an automatic £100 penalty on top of that, plus interest.

I check the PwC website and see the same “in process” status on my tax return. When I phone PwC to inquire about the progress, I am told that the Bank still owes them some paystub copies, without which they cannot process my return. Why are you not contacting me about this? Aren’t we nearing the deadline? I ask. The woman talking to me says, Oh, you don’t have to worry about that! Your employer will assume any penalties – it’s part of your package…

Not because I seek to save my employer from having to pay a penalty on my behalf, but because I don’t like being late for anything, I insist of taking care of required documentation myself. It turns out that PwC is perfectly ok with me faxing the copies of missing paystubs to them. Which I do the next day. It’s still January 6th or thereabouts.

Subsequent phone calls over the next few weeks yield little in terms of tax return ETA, but I am repeatedly assured that I have nothing to worry about. Finally, on February 4th – which happens to be the first Monday immediately after the deadline! – I receive an email that advises me to print out, review, sign and send in my finished return as soon as possible, alongside with paying £158 in additional taxes and £100 in penalties. The email assures me that the penalty will be reimbursed to me by my employer “as per the agreement”.

I sign, send and pay online, but in a few days I receive an official notice from HMRC – which is British for IRS – stating that since I did not pay my taxes on time, I now owe the penalty.

More phone calls ensue: Me complaining to PwC, them ringing HMRC on my behalf to find out where the wires have crossed. Eventually, they relay back to me that my return is all fine, that the Bank has already made a separate penalty payment for me, and that I should receive my hundred quid back imminently.

That was February 28th. I still have not seen that hundred. Which means more phone calls next week.

Now, tell me, was all this hassle worth it? Wouldn’t I be better off by doing the simple self-assessment, say, on January 28th?

Well, I’ll have the chance to test this hypothesis next January…