Disclaimer #1: Admittedly, I am not much of a skier.

Disclaimer #2: The closest that I’ve ever been to a major North American skiing resort is Mont-Tremblant in Quebec, which normally figures somewhere in the Top 20 on the travel magazines’ lists. I have never been to Colorado, Utah or British Columbia, having otherwise satisfied my limited skiing needs with Poconos and once with Vermont.

So, while I want to make a statement of the kind of There’s nothing like skiing in Alps, it will probably ring hollow. And yet, I am pretty sure that an Alpine skiing experience is likely to leave a lasting impression on anyone who’s done it for the very first time.

You clearly need nice weather for your skiing trip to be enjoyable, and we lucked into an entire week of bright blue skies, warm sun and no wind (funnily, the day of our departure started out very foggy and considerably less pleasant than the preceding week). You obviously need good snow on the slopes, as well, and there was a huge snowfall several days before our arrival. And last, but not least, you need gorgeous scenery. And the scenery in Alps is simply breathtaking. 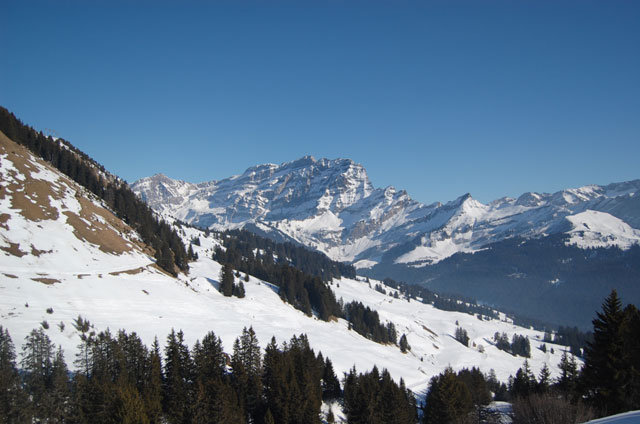 Now, we were not at Zermatt or Chamonix or Kitzbuhel, but at a decidedly less glamorous Villars-sur-Ollon, which may figure in the Top 20 of Swiss resorts, but no more than that. And the fact that we loved it lends a certain inference to the notion of the aforementioned top resorts being so much more impressive.

Villars is an archetypal Alpine resort village, dominated by chalets, hotels and commercial enterprises that target skiing clientele (i.e., rental and repair shops, skiing gear boutiques, bars and restaurants). Quite picturesque. It sits at an altitude of over 1200 meters, reachable via a couple of narrow winding roads. For a person who does not drive on such roads habitually, it is a bit of a challenge to get to/from Villars, which contributes to the once-here-stay-here atmosphere. While we had little need for it, the village seemingly has all of the amenities for around-the-clock entertainment, including performances and the night scene.

The main skiing slopes “terminal”, Bretaye, is 600 meters above the village, accessible via a train line. If there is one major drawback of Villars, it’s this: The trains run no more frequently than every 15 minutes even during the peak morning hours, and take over twenty minutes to get to the top. You can spend upwards of half an hour just getting to the lifts. (There is an alternative route involving a bus and a gondola lift that takes about the same time, but deposits you at the top of a slope).

But once you are at Bretaye, the possibilities are endless, with dozens of lifts – button ones, t-bar ones, four-seaters, six-seaters, gondolas – and slopes of varying degree of difficulty (we kept mostly to the blue ones, although Natasha mentioned a red and I am sure that Becky went on more than one of those more advanced ones). For those interested in exercise but not in skiing, there are miles and miles of trails for snow-walking. For those interested only in scenery and relaxation, there are strategically positioned bars and chalets, most with lounge chairs facing the most dramatic – or most peaceful – landscapes. And if you have been skiing, then at the end of your session you do not have to get onto the crowded train again, but instead can take a long and leisurely slope all the way back down to the village.

We did all of that, to a degree, Becky with the teen club, Kimmy with the kids club, and Natasha and I with our assigned group led by a exuberantly mustachioed instructor, whose limited command of English was outrivaled only by his non-existent teaching aptitude. Natasha still skied every morning and afternoon session with the group, having a lunch break every day at a mountain chalet. She swears that her skiing improved as a result.

I did only two morning sessions, taking the train down the mountain after lunch; on two other occasions, I tried snow-walking with funny implements on my feet that are called raquettes, once on my own and once with an entirely French-speaking group. Because I had some spare time on my hands as a result, I also took a couple of aimless strolls around the village.

Becky eventually got bored with her skiing partners and joined Natasha’s group for the last couple of days. The fact that there was a friendly English-speaking boy of 16 in the group did not hurt.

Kimmy had two skiing sessions every day as well, with a lunch at a chalet in between. This was only her second attempt at skiing, but by the end of the week she became quite proficient; certainly better than her father. For a couple of days she was really excited at the prospect of “ski school”, having made fast friends with an English-speaking girl at her group. But the poor girl broke her foot in mid-week, and that put a bit of a damper on Kimmy’s skiing, as the rest of the kids were either boys or non-English-speakers… She still enjoyed it overall, I think.

And we all did. Truly, when the weather is perfect, the skies are blue, and the snow is sparkling, there is nothing like skiing – or simply being – in the Alps.