On Hitchhiker’s Guide and fantasy genre in general

I consider myself a well-versed fan of the fantasy literary genre (which I know sounds shallow compared to all of you Coelho-worshipping crowd). I’ve read Lord of the Rings and Harry Potter, The Wheel of Time and Discworld series, the best currently continuing epic The Song of Ice and Fire and scores of lesser luminaries.

It was a bit overdue, though, that I read Douglas Adams’s Hitchhiker’s Guide to Galaxy “trilogy” (there are five books in total).

What this series clearly illustrated to me is why I no longer like any whiff of interstellar branch of science fiction. Or, rather, let’s put it this way: I still cherish the old favorites – and can occasionally revisit them – but that feeling is purely sentimental. My natural wanderlust always attracts me to stories of exotic places and amazing experiences, but when the imagination of the author starts stretching the coherence of his creation (which often happens with any book whose boundaries in inventing fantastic societies and races are, well, as wide as the universe), I tend to lose interest. Give me a homogenous world whose cultures can be identified with those found on Earth, sprinkle some magic (preferably, in place of technology), and then use your imagination to invent engaging plot lines – that’s the recipe.

That is not to say that I have never come across an awful fantasy book, one built broadly within the blueprint set forth by Tolkien, but in which peoples, events and magical powers are constantly invented on the spot for the convenience of progressing the narrative, leaving monumental loose ends and incongruities for the sake of grandiose storytelling. Terry Goodkind’s The Sword of Truth comes to mind in that category.

If you have read all seven of the Harry Potter books, think back to any place in the series where you felt baffled by an event or somebody’s behavior. I bet that by the end of the seventh book you were no longer mystified by that seeming peculiarity. Every loose end has acquired a logical and fitting explanation by the end, to no detriment of the main plot. That’s masterful storytelling for you. 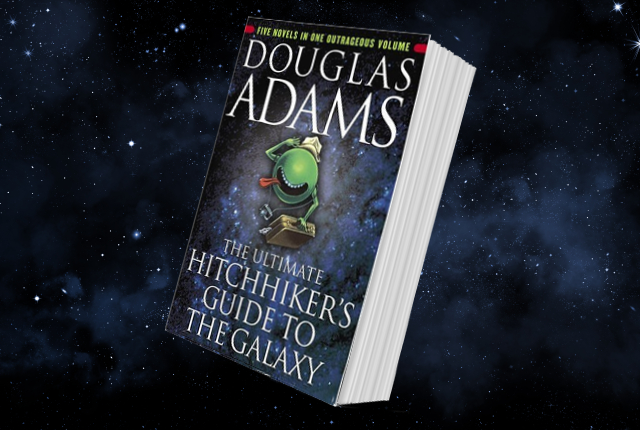 But back to Adams. While a couple of fairly important characters disappear from the narrative for no discernible reason, he does tie some of the loose ends in the finale, propped up by an ultra-scientific time-space-continuum construct. The endless stream of quasi-commonplace observations and unexpected turns of phrase is extremely witty and enjoyable all in itself. But it is as if they are the whole purpose of the book (and, likely, they are!) – each scene feels no more than a background for the next joke. The book is supposed to be full of satire, but it’s stand-up comedy satire – a string of anecdotes loosely connected with an overall theme and some recurring characters.

Some zany inventions help the book in its task of grotesque satirical exaggeration, but continuing casual references to various planets, whose names often appear to be made up by random letter generators, quickly become bothersome. And while in the first couple of books the events seem to be somewhat naturally unfolding, the latter ones are not above committing the sin of suddenly introducing something or someone that conveniently pushes the plot towards the next anecdote topic.

All in all, not an entirely bad read, but far from the genius kind.

If anyone who’s read these books cares to express their opinions, I’ll be happy to compare impressions.