As promised, I am starting to mix it up in my blog with things that I’ve never done before, such as movie reviews. For my first such post, I am reusing some of the material first posted here.

I am a firm believer that you have to read the book prior to watching a movie based on it.  If the movie is well-made, you benefit from understanding the context from the outset.  If the movie is less than good, you probably will be further annoyed by your involuntary mental comparison with the written work; but then, could not being familiar with the original work ever make a bad movie better?…  I guess there is an outside chance of stumbling across a good movie that is not truthful to the book it is based on, in which case, not having read the book could actually be beneficial for the cinematic appreciation, but I’d rather disassociate the movie from the book in that case altogether…

Unfortunately, I have not read Northern Lights by Philip Pullman yet.  And that quite possibly coloured my impression of The Golden Compass as oddly dissatisfying. 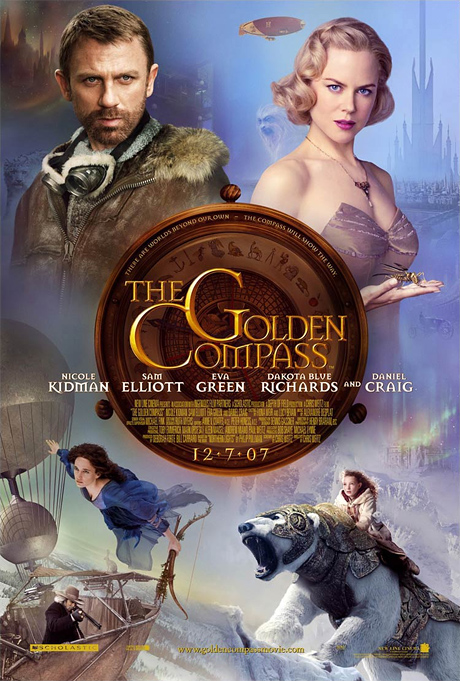 Maybe it was because some concepts of that particular fantasy world were not adequately explained, or because some events veered too much into the realm of “accidental” narrative, or because I had no prior inclination that the story is not going to be complete until undoubtedly forthcoming sequel, or simply because I cannot get behind an idea of a tween girl as an astute and sage heroine. But overall, this reminded me too much of The Chronicles of Narnia: Visually arresting at times, extremely well-made, yet lacking the masterly storytelling of The Lord of the Rings or Harry Potter.

There are simply too many details of this fantasy that probably have a well-grounded explanation on the pages of the book, but leave me scratching my head in bewilderment.  Why do all animals appear only as daemons whereas bears enjoy special status?  Why does Mrs. Coulter’s daemon never speak, even though other adults’ daemons do?  What exactly does the Magisterium do and why is it evil, beyond obvious fact of one of its functionaries trying to poison a noble lord and its proclaimed plan to mold the next generation (in a discernibly cruel, although not clearly understandable way)?  Who are the witches and exactly what it is that they do with their long lives besides flying and shooting arrows?  The list of questions can continue for a long time.  The plot just lurches ahead without much of an explanation.

But the visuals are astounding, the CGI is close to perfect (in some scenes, Iorik is discernibly “animated”, unfortunately), and the acting ensemble is rather good, although the utter disappearance of Daniel Craig’s Lord Asrail from the screen upon his capture in the North (very early in the movie) – even though we are later shown his image as being alive and well – is another incongruity.

Nicole Kidman is perfect for the role of beautiful, powerful and altogether villainous Mrs. Coulter, but even she struggles with maintaining a depth of character.  Sam Elliot, with his unmistakable voice and manner, is just as perfect as Lee Scoresby, although his participation in the proceedings never rises beyond accidental.  Iorek is majestically voiced by Ian McKellen (I initially “recognized” Patrick Stewart’s voice – the idea to check credits came to me much later).

The movie ending – not at the same point as the ending of the first book of the trilogy, I am told, – is neither an obvious place for a to-be-continued, nor a true cliffhanger.

If you read this far, you might be wondering why I gave the movie a partial endorsement in the form of 4 stars.  It’s a case of form over substance.  I liked the way the movie looked enough to say that it is a worthwhile viewing, especially for an admirer of the fantasy genre.  Plus, I will certainly read the book shortly, and possibly, my appreciation of the movie will improve with better contextual understanding.

I did appreciate the nice touch of having the Tartar commander respond in perfect – and consistent with English subtitled translation – Russian before the culminating battle. It may be literally taken from the book (the depicted parallel universe does have enough in common with ours to suggest that northern warriors could be Russian equivalents), or it may be director’s Cold War prejudice; either way, for all other patrons in the audience, it was foreign gibberish, while my family almost burst out in laughter…