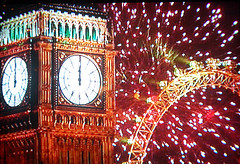 Happy New Year, everyone! I hope it will be prosperous and happy for all, certainly better than the year which just ended, and I trust that everyone did their best to greet the new year’s onset in a boisterous and fun way.

Us, we almost spent the occasion home for the first time in ages.

Natasha arrived home on Sunday. The vagaries of modern travel were illustrated by a mild bomb scare at the Vienna airport, precipitated by some abandoned luggage, but, in the end, that did not affect her itinerary. Her spirits were understandably not very high (if you have not visited this blog in the last week, you can find the reasons why here). We were looking forward to a party at the house of our friends Mila and Andrey; taking Natasha’s mind off the recent tragedy was certainly of larger importance than the customary need for a joyous celebration of the New Year.

Unfortunately, Mila called us with the unpleasant news of their entire household catching a nasty virus. The party was postponed to the Old New Year (I will explain this concept to my non-Russian readers in the future). We were suddenly faced with the prospect of greeting the new year in the company of just ourselves, which was not only practically unheard of, but also would doubtlessly be laced with melancholy.

Our good friends Anya and Ari came to the rescue. With their 19-months-old kid still suffering jet lag effects after a couple of weeks in the States, they were not going to go anywhere for New Year’s Eve. However, they did not mind company. So we jumped into our car, made a comparatively unencumbered with heavy traffic drive to St Johns Wood, and spent the night around the table with friends. There was plenty of fine food, a magnum of Dom Perignon (a sometime birthday gift to Anya from a friend, which the guys decided merited the occasion), lots of discussions on a large variety of topics, and even time to squeeze in a partial viewing of Ирония Судьбы (translated into English as The Fate’s Irony, a New Year’s Eve love story that has enjoyed cult status in Russia ever since its filming 30 years ago). The girls entertained themselves with cartoons, internet, reading and occasionally joined us for bits of meal.

It was a considerably more understated celebration than our erstwhile ones, but it was positively necessary.

The morning brought especial joy to Kimmy, who happens to still believe in Santa Claus. Of course, we primarily call him Дед Мороз (literally translated as Grandpa Frost) and do not expect him to visit our house on Christmas night, but rather on New Year’s. Kimmy wrote the big guy a letter, asking him for a bunch of different things, a couple of which we specifically bought. While everybody else’s presents had been sitting under the tree for a few days, Kimmy’s were hidden away and only put under the tree after she had gone to bed upon our return home from the celebration. Along the way, Santa’s not-so-little helper – yours truly – disposed of Kimmy’s letter to Santa that was waiting by the tree.

As soon as we got up in the morning, the excited kid announced that Santa has taken her letter with him and left behind a number of presents, inexplicably wrapped into the same paper that we had together bought several days ago… When she unwrapped the box with exactly whet she was asking Santa for, she was literally beside herself with elation.

Wonder if this will help her retain her belief in Santa for another year. I vaguely recall that Becky stopped believing right about this age.

We did slip in a gift to Becky as well, which Kimmy assured her came from St Nick. Becky later privately confirmed that the gift came from her parents…

The first surprise to me that the New Year proffered was considerably less pleasant: Our home broadband router conked out and could not be revived. After thirty minutes on the phone with technical support – I have to admit, the demeanor and overall helpfulness of the technician was above what I suppose were my reasonable expectations for the first of January, – I came to realization that I’d just have to buy a new router. Thankfully, big electronics department stores happen to be open even on January 1st. A couple of hours later, the lifeline to the web was humming anew, and my somewhat superstitious premonitions about starting the new year on a sour note were alleviated.

On the other hand, the visiting car-washer showed up bright and early (for the first time since his initial visit) and made the car look presentable for at least the next couple of days…